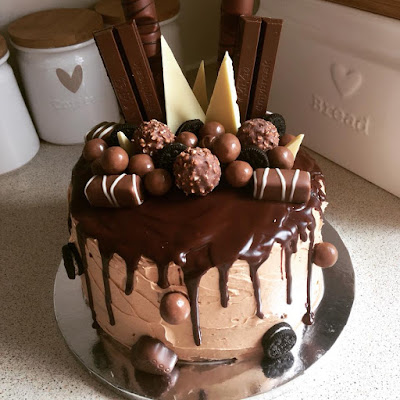 I've seen loads of these stunning drip cakes all over Pinterest and I've been dying to give one a try!

I decided to run a chocolate hazelnut one as a competition to raise some money for my Great North Run, but I both needed to practise first... and have one to show people who might like to enter the raffle that I could come up with the goods!

I gathered some ideas on Pinterest and researched some recipes and tips before getting going.

I have a basic chocolate cake recipe of my own I like to use, so I decided to times that by two and make the sponges. I am entirely unscientific... I would normally do six eggs for four layers of sponge, but the mixture looked good with five so I left it at that haha!

But the basic premise is:

With a hand mixer (stand mixer is definitely recommended though!) I blitzed the sugar and butter together until pale and fluffy, before adding an egg at a time until well mixed. Then I added the milk and stirred it in.

I then sieved in the flour, cocoa powder and baking powder into my bowl, before folding it in carefully until combined.

I heated my oven to 180 degrees celsius, and divided my mixture equally between four 22cm (8 inch) round sandwich tins.

I put in two tins at a time, close to the top of the oven.

Also unscientifically, I opened the oven when I thought the were kind of done... maybe after about 15 mins... and when the sponges bounced back when pressed I got them out the oven! I checked them with a skewer to make sure it came out clean and left them to cool on a rack.

Once the cakes were fully cooled I trimmed them to look neater (they were fairly flat so I didn't need to level them). I then made the buttercream filling, which I found here. In UK measurements, it's basically three heaped tablespoons of Nutella, 500g (1lb) of unsalted butter and 360g (12oz) icing sugar.


It was soooo easy to make with the hand mixer and it spread like a dream, both between the layers and on the outside of the cake. I first did a 'crumb coat', a light coat of buttercream to secure the sponges, before leaving the cake in the fridge for an hour for it to set.

It's recommended you use straws, dowels or even cake pop sticks to make sure your cake layers don't slide, but mine was really stable when I layered it up so I just gambled and left them out, you can use them to be on the safe side, though.

I then did a second neater coat, covering the whole cake, getting it as smooth as possible for my ganache to go on top. I then put it back in the fridge to cool some more so my drips didn't go too runny when the ganache went on top.

I was worried about making the ganache. I had made ganache before, but with double cream, and it had curdled something rotten. But luckily this recipe worked really, really well!

I let the ganache cool before attempting my first drop, and it went on ok. I did the outside of the cake in drips and drabs before filling in the top and letting it smooth. In future I would do this bit a bit quicker as the ganache cooled pretty quickly on the cake, and some of my chocolate decoration didn't stick too great!


For the top decoration, I used one Kinder Bueno, one four finger Kitkat, Ferero Roche, Milk Tray, mini Oreos, Malteasers and chopped hazelnuts. But people can use all kinds of things... chocolate fingers and Rolos look good too.

I used some cocktail sticks to secure the Buenos, but all else just stuck into the ganache!

And viola... it took me six hours in total... but a lot of that time was baking then cooling... and I was so happy with the finished product!

Kudos to Angel de Sucre for the inspiration/blatant ripping off.