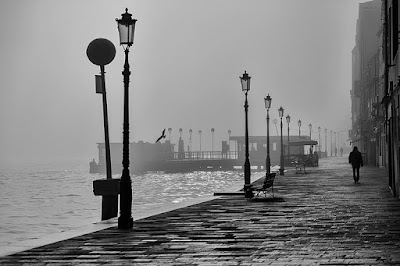 It was one of those mornings she loved. Though the mist clung close to the coast, it was probably sunny half a mile inland.


The mornings weren’t yet cold enough for frost, but the chill still prevailed and she’d had to break out her winter coat. Thankfully it still fit.


She breathed in the autumn air - taking in the smells she’d come to recognise as home - salt, seaweed, chips; fumes from the buses.


It was almost 11am - she knew he’d be late again. She also knew he’d want to go Smith’s cafe, even though it was the greasiest of the greasy spoons in town, all plastic chairs and vinyl tablecloths, couples who looked about 100 years old tucking into black pudding and baked beans.


She sat back on the bench and wondered how she’d come to view these years later on. Probably a wasted time, she’d thought, cynically, before softening. They’d had some fun together, she supposed.


“Why am I thinking as though he’s gone? As though it's over already?” She asked herself, still melancholy, despite the fact they still had a good few months left before they parted ways.


And even so, not that much would separate them anyway - Liverpool to Cambridge wasn’t that far. really. But at 17 years old, only ever knowing one small town, it really, really felt it.


Tired of the cold bench, she got up and wandered down the pier. It was such a contrast on a cool Sunday morning in November to a warm Saturday night in July.


On those Saturday nights, they’d sit together on the side of the pier, dangling their lanky legs out to sea, sometimes sharing a couple of beers. Though they weren’t old enough to get into the pub, he’d sometimes still manage to smuggle a couple from the shop.


As the excited young couples walked by, dolled up from head to toe ready for the bustling dances, they’d laugh at how sad ‘those people’ were and how much more fun they were having instead. She wasn’t exactly sure it was true - but if she was being honest with herself she knew she didn’t have much of an option either way.


On those balmy nights, children would run by screaming while grasping their spinning windmills, parents would idly pass by, hand in hand, happy for a week away from the grind. Older people would stop and gossip on the benches, eating ice creams, gulls would swoop in for the hope of an errant chip, or even better, a scrap of fish.


But none of that today. The tide was out so there weren’t even any fisherman on the pier, just a couple of dog walkers who chirped “morning”, as she passed by.


On a couple of those nights he’d walked her home and they’d drunkenly stumbled down through the town, laughing at stupid things, sobering up after some chips so her parents didn’t suspect anything. They’d stroll past the rows and rows of guest houses and the shops lining the central streets, past the tall terraces with flats for many of the amusement workers, and headed out into the leafier part of town, all privet hedges and beech trees lining the streets stretched with semi-detached houses.


She looked down at her watch, it was five past the hour now, and he must be getting off the bus soon. She picked up her pace, the heels of her Mary Janes clicking on the wooden slats.


On the promenade she saw a familiar figure striding towards her, who must have finally admitted it was cold as he'd switched to his peacoat.


“Alright? It’s freezing this morning! Coming to Smith’s?” he greeted her, hands in his pockets, fringe in his eyes.


“Sure, why not,” she smiled, deciding she would probably look back fondly on these days afterall.
Create