- May 17, 2020
Those of you who have been stuck in lockdown and traipsing round every corner of the Avenues like me, will no doubt have come across St Ninians Walk. Running between Ella Street and Victoria Avenue, down the side of the railway line, next to the old Jewish cemetery, they are a group of individually designed houses that stick out like a sore thumb in comparison to the Victorian and Edwardian redbricks in the surrounding area.

I let my bored lockdown imagination run away with me about the potential occupants of these ultra-modern houses, and wondered whether Hull might have its own community of vampires. Enjoy!

It had been a bit of a task trying to get the council to approve the planning permission.

They kept asking all kinds of questions, like, ‘Why do you want your houses built next to a cemetery?’ And ‘Why do the metal fences need to be so high and the windows blacked out?’

But this was the perfect location. We didn’t want to live anywhere accessible on Google Street View.

Luckily, when you have a hypnotist in your pack it’s not too difficult to get planning officers to change their minds.

Dave hadn’t been a postman very long. He’d been working in a pub, but the lockdown meant pints were out and parcels were in. The early mornings were difficult to get used to. He’d been somewhat a creature of the night a few weeks before. But now he was pounding the pavement in the early morning sun, instead of waking with a hangover and a lingering sense of doom around noon.

Taking in the streets of the Avenues, the postal round was pretty easy really. Rows of terraced houses, neat front gardens, all the street numbers easy enough to find.

But there was one stretch of houses out of place with the rest.

Where Ella Street ends and the old Jewish Cemetery begins, there was a long lane with modern archictect-designed houses squeezed between the cemetery and the railway line. Walking past these new houses, so out of character for the area and so tucked away in a tight space, Dave wondered to himself why you’d want to live there instead of one of the big old houses in the leafy streets surrounding. Either that or build yourself a swanky newbuild in Swanland.

He posted his letters through the boxes between the six-foot fences that surrounded the houses, with the towering minimalist structures fortified by the metal spikes. He wondered what kind of people might want to live there. Definitely people with money. In need of a very private life.

Some people still think Hull was an odd place for the pack to settle - but in the opinion of the oldest members there was nowhere better. Anything goes in Hull - the place was full of goths and ghouls. Where else has a club called ‘Spiders’?! These people called ‘Spice zombies’ roaming the streets?!

Dave blinked and yawned, stretched out his arms wide and whistled with the songbirds as he made his way down the streets. He had so many letters to deliver that he'd started early and it only just getting light.

Today wasn’t as nice as the other days. It had felt like a cruel trick of fate to award wall to wall sunshine and blue skies at the same time as quarantine. But that day it was cloudy and still and a little muggy, drizzle threatened at any point.

Dave finished his round on Victoria Avenue and made his way down St Ninians, the oppressive fences and buildings towering down on him, the walkway narrowed by the sudden summer trees.

An eerie stillness seemed to come over this part of his round. He felt like he was being watched. The chattering birds seemed to have deserted him, but not a soul could be seen anywhere around. Where were the people who lived here?

Just after the first cemetery gate, Dave could hear a child’s voice drifting down the lane, singing a strange song. He wasn’t sure it was in English, but that’s not uncommon in this reasonably multi-cultured part of the city.

However, as he came closer to the garden he could see a child’s hand gripping one of the metal fence posts, a dried brown liquid trickled down its thin fingers. He didn’t want to stop and stare, but out of the corner of his eye Dave could see a little girl, as pale as a ghost, a dark red hood framing her face.

In her other hand she grasped what looked like a whole leg of lamb. A raw whole leg of lamb. Dave walked past quickly - desperate to get out of the walkway and not make any eye contact with the strange child - who fixed her stare directly at him as she lifted the hunk of meat to her lips.

You see some weird stuff in Hull, he thought to himself.

This new postman is awfully nosey. I spotted him on CCTV gawping at Clara in the garden. Not that she should have been out while sucking the juices out of our latest victim. I did scold her about that misstep.

I think we might have to give him the same treatment as the last postman we had down here. We still need to receive our letters from Boris of course. But he definitely won’t question any letters closed with a wax seal and flecked with blood this way…

Dave tried to brush off what he’d seen down St Ninians Walk the day before. It could have been anything, a dog toy, some weird religious custom of some sort. He didn’t want to know.

As he reached into his satchel and pulled out the usual mix of circulars and greetings, he noticed a man blocking off the end of the lane, perched on a bollard, hands in pockets. Something about this seemed really off to Dave.

Worried about the strange man at the bottom end of walk, Dave turned to head up the way he’d come, but there was another man at the end of the lane, even taller than other one, with what looked like some kind of hooded cape over his head.

As he posted his final letters, the men started closing in on him. There was only one choice. He panicked and decided to scale the cemetery gates.

The chubby fool had tried to jump over the cemetery gates. I don’t know where he thought he was going, it was enclosed by us on all sides.

He’d got his silly cargo shorts caught on the metal spikes, but we were kind enough to let him down. He won’t be causing us any problems anymore. 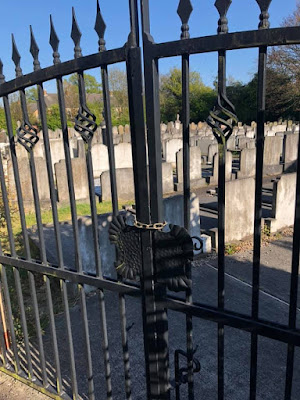