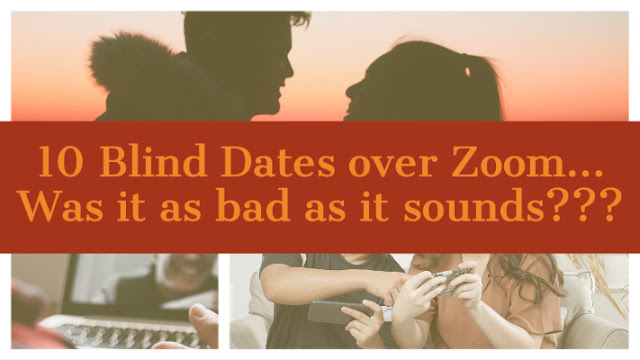 I think when I was in sixth form I went on a kind of date. In the spur of the moment a guy took me for pizza after classes and then we played pool at the pub. Back in the days when a 17 year old didn't need ID to get served!

But that was 15 years ago. It didn't really feel like the dates I'd seen on TV on like Friends or Sex and the City. They'd get dressed up and go to a fancy restaurant, the guy might bring flowers. I've still not been on anything like one of those dates as a singleton!

Having been happily single for a few months, I've felt a bit more open to try dating recently, but then the lockdown came.

(Don't even ask me about how I'm feeling about definitely being single until a vaccine comes along because I will actually cry....)

I haven't fancied bothering with virtual dating since lockdown hit, because what's the point really?! What happens if you spend six months chatting with someone and then the chemistry when you meet is zero?!

I spotted on Facebook that my course friend from uni, Katie, was holding online speed dating with some people she knew, but was looking for more people to sign up. I chickened out the first few sessions... thinking what could be worse than meeting strangers over a dodgy video connection when no one has much to talk about?

But... I was brave and decided to bite the bullet and give it a go last week.

My thinking was... I probably could do with a bit of low-stakes dating experience. It was low stakes because none of the guys were local (most seemed to work in the TV industry in London) so I knew no dates would lead anywhere, and at four mins per date even if it was really awkward it was over within minutes. I signed myself up.

I told my sister about what I was doing and she was worried there might be some complete creeps on there... but I figured since it was basically friends of friends of friends taking part it was probably unlikely? At least I hoped it was.

When Sunday night rolled around, I had a few initial disasters. (This is me. Of course I had some disasters!)


First of all - I took the 'quarantine chic' theme a bit too seriously/literally and was the only knobhead there in a pair of fancy pjs. FFS! Well, at least I wasn't scared of making an idiot of myself right?

I also couldn't get the internet to work on my laptop and had to do the call on my mobile - while the phone was on charge so it fell over a couple of times and I was not in a comfortable position all night. I did not get a flattering angle at all. And my phone camera wasn't the best.

But after that, it was ok to be honest.

I think I had about eight dates in total in the end... Katie organised everyone into rooms for the four minute dates, and in between we played drinking games and did challenges. I had a couple of gins and it was definitely a fun escape from lockdown stress. And I heard a really funny story about an American socialite that I can't repeat...

So. Down to the dates.

My first date was with an actor... who was very nice and pretty good looking and great to talk to. A good person to have first while you're still a bit nervous!

I then had some more dates, all of which went pretty well, the guys were again nice and really easy to talk to.

Then I had a bit of an awkward date with a guy who first up thought my accent was Scottish (he really can't get outside of the M25 that often) who was then surprised I knew the organiser from uni and asked me what year I'd graduated.. 2011... he'd graduated 2018. Definitely not!

I had a few more dates, one who I really liked and would have liked to have messaged were he not in London to see if there might have been anything romantic there, and one with a really cute sausage dog who definitely sold the guy to me haha. That's cheating surely - getting to your dates through your adorable pets?!

Then I had a really awkward date. The guy was just not interested and didn't do a great job hiding it, the conversation wasn't great and he left pretty sharpish when we got the one minute count down to the room closing. I can't imagine what I'd do if that happened in real life. It would just be so bad!

Overall, despite a few technical difficulties and seeing a couple of the guys twice by accident, it went ok.

Some of the guys were so funny and interesting and good looking I just felt they had no right being single ha! But I definitely didn't meet anyone I felt like I had an instant connection or chemistry with... so if I was taking it seriously I'm not sure how much I would have got from it?

However, not being someone who was taking it seriously, it was just a good practise exercise. It was good to talk to some new guys, see what I liked in people and what I didn't, beyond just physical appearance, and also just seeing what worked when getting a first impression of someone.

So to answer my original question... was it as bad as it sounded? Definitely not! And it made a nice change from quizzes.

The next day my friend messaged the group and said that it had been really successful and a lot of people had given their numbers to other people, which was really nice. I'm hoping some of the London folk get together after the lockdown ends!

Would I do it again seriously with people who live nearby?! I'm not sure. I'm not sure whether I'd just write everyone off for no chemistry still. Maybe I'd swap numbers if I kind of felt something and there was the chance of something more happening if they lived closer? Again I'm not sure.

Still, I'm glad I gave it a go. Just like with any kind of dating, you don't have anything to lose. What's the worst that can happen really?!

(Probably turning up in your pyjamas, let's face it.)