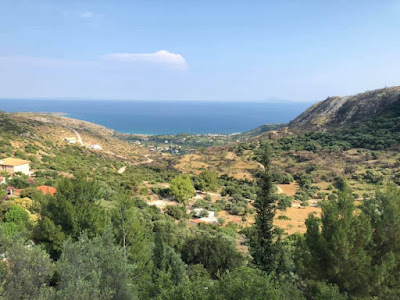 I've wanted to go to Kefalonia for such a long time!

While I was in sixth form, our English Lit class got the choice whether we wanted to study Captain Corelli's Mandolin, and ever since seeing what the island (where the book is set) looks like, I've always wanted to visit.

Picking somewhere for a summer holiday, we chose Kefalonia as it had lots of nice scenery and stunning beaches, as well as some cheaper accommodation options, but most importantly, it is one of the Greek islands that (allegedly!) stays cooler in the summer.

However, despite averages being around 25 degrees for June/July, it was actually 31/32 degrees all week! Killer!

To be honest, we'd have seen a lot more while we were there except for the fact that it was so warm - I'm not great in the heat, so walking round castle ruins etc with no shade in the midday sun? Nah! Not for me! But that only means if we want to visit again we'll have plenty more to see!

Here's a guide to some of the places we visited...


We flew out at 5am, which was awful, but luckily we got to the island nice and early and spent the day relaxing.

We picked up our hire car - a really battered old Fiat Panda (Top tip - don't go for the cheapest hire car out there!) and went to the hotel.

We started driving to the hotel, in a village called Vlachata, and couldn't believe how mountainous the island was! We were shadowed by mountains - or driving through mountains - our whole stay.

We hit the pool, which was lovely and warm - our location was deep into the countryside and there was loads of nature - a buzzard flying overhead, loads of dragon flies and butterflies, as well as swallows catching bugs on the surface of the swimming pool!


We sunbathed then had dinner at Souvlaki - a nice kebab before collapsing into bed.

On Wednesday we took a short drive to Argostoli, the islands capital city - which is more like a town! It is famous for being a good place to spot the island's Loggerhead Turtles.


The weather was boiling hot! We walked across the De Bosset Bridge into town, saw one turtle in the distance, but it quickly swam away. We walked around and saw some more by the fishing harbour, then headed over to the fishing boats where there were loads being fed by fishermen - to the delight of the tourists - including us! 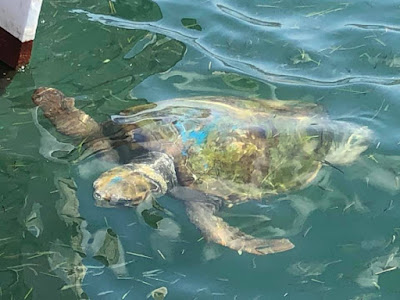 We then had a walk through the pretty shopping streets before heading back for the afternoon.

In the afternoon, we chilled out on Lourdas beach near our hotel - the beach is really calm and though stony has some free sunbeds and lovely clear water to swim in.

On Thursday we took the mountain roads to Sami, which provided some breath taking views but some scary driving! (Not as scary as what was to come though...)

We stopped first at the Melissani Cave, but it was way too busy - and at 11am it was already far too warm to queue outside. A cruise boat and some bus tours all turned up and were waiting to go in - it would have been over an hour to queue to get in.

So instead we went to Sami for a walk round - which had a really pretty harbour with some crazy super-yachts and some nice harbourside cafes.

Next we took a 15 minute drive to Antisamos Beach. Antisamos is famous for being the location for the film Captain Corelli’s Mandolin.

It’s a hairy drive down to a pretty beach - surrounded by trees on steep banks - but it was a complete tourist trap - with barley clothed waitresses demanding you order food and drink before you can have a sunbed!

Dance music was blaring out - fine for like Ibiza - but we just wanted something chilled! We were stuck and decided to see if the cave was any less busy.

Luckily, there was no queue at the cave and it was well worth a visit! The visit was beautiful and interesting. It involved taking a short trip in a rowing boat through the cave, whose roof collapsed some years ago.

Apparently scientists are baffled as to how the water gets into the cave - allegedly it comes all the way from Argostoli at the other side of the island through a series of underground tunnels.

On Friday we scheduled a ‘free’ day with nothing planned - so we had a lie in and some breakfast before wine tasting - which was delicious!

The Gentilini Winery was a bit in the middle of nowhere, but had nice wines and free snacks to go along with it.

I had five wine tasters and Phil three because he was driving - but the wine was so nice we bought a bottle of rose from the vineyard.

Then we chilled at Lourdas beach again!

On Saturday, we headed to Skala in the morning but it wasn’t very interesting - the beach wasn’t particularly pretty and the town was very touristy. The shops were filled with fake football shirts and wooden dicks painted with Greek flags...


We cut our losses short and headed down the coast to Poros. In Poros, a small and pretty if not slightly rundown town, we enjoyed a huge lunch for only 16 euros then went to the beach.

It was nice and lots of locals were there enjoying the weekend. The sea was quite choppy though and I daren't go in!


We had a wonderful drive home through the mountains and even saw the wild ponies local to the island - which are apparently quite rare! Sadly I didn't manage to get a photo of them though.

Sunday was our big sightseeing day. The tour of the north west of the island!


The drive was so scary. We had to travel on narrow roads on the sides of cliffs with rock slides at one side and a huge sheer drop off the other. The views were out of this world though!

Our first stop was Myrtos Beach - an island paradise with white beach, turquoise waters surrounded by sheer cliffs. It was such a good view.

Next we mooched on to Assos - which was straight out of a Pinterest board ha! It was such a pretty place - me and Phil couldn’t think of many places we’d been prettier than Assos - with its beach, harbour side, pretty pastel houses and turquoise waters. Yatchs lined up to come in for lunch while families played on the beach. We stopped at a cafe to people/yacht watch and it was just idyllic.

Our next stop was Fiskardo - which was like Assos but bigger. It was kind of ruined by the cruise liners and tourist boats in the harbour, and it’s small pretty shopping streets were crowded with people. maybe one to visit on an evening instead I feel?


After this we were unsure of where to go and I suggested a less well known beach I’d seen that looked pretty.

We took a detour to Agia Kiriaki and were so glad we did. It had a very chilled vibe and we sunbathed and read and swam in the sea and enjoyed the nearby beach bar. Highly recommended if you’re in Kefalonia and looking for some relaxation!

Monday was sadly our last full day! We headed to Argostoli once again to say goodbye to the turtles!

We then headed to take a look at Lassi - which we hadn’t been to yet - but because it was a nice big sandy beach it was packed - with so so many people in the sea - so we decided to go back to Lourdas for the third and final time haha! After some food we went on the beach and sunbathed and swam.

In the evening we went for a three-course meal at Gefiri’s, which had been our fave restaurant, complete with a litre of lovely wine for only €8! A fab way to finish the holiday.

- Eat out - the food is delicious and good value for money

- Watch out for stray cats and especially dogs on a night!

- Don't cheap out on your hire car

- Don't order a coke while eating in the bigger towns or you'll be surrounded by wasps...