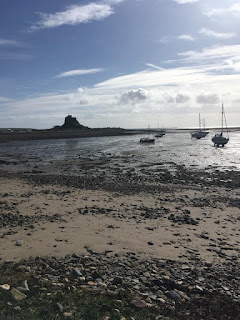 After the stress and craziness of the Great North Run (hello one hour queues to get back on the metro!) I was in very much in need of some relaxation time in Northumberland.

I can't in all honestly say that is what I got though! Just because there is so much to see and do in the area, I ended up spending many hours on my feet anyway.

Me and Phil spent Monday to Wednesday in the county, staying at a very nice Airbnb in a small village called Felton, near Alnwick.

We arrived late on Sunday night after the run, and had a delicious Sunday dinner at the Northumberland Arms, which was very much needed by 8pm after burning 2,000 calories on the run! This was followed up by sticky toffee pudding to share. Had to be done!


The Monday morning we decided to head into nearby Alnwick. I'd been to Alnwick before for a flying stop and wanted to see some more of it.

We decided to head to the Castle, which was famously used for the wizard training in the first Harry Potter film, and even saw some children taking part in broomstick lessons on the lawns.


It was a lovely castle and we enjoyed seeing all the different rooms and features, but gave the gardens a miss as the weather was not great!

After a walk around the town we went to Barter Books, which is an old railway station converted into a second hand book shop. It is any book lover's dream and well worth a visit.


Next stop on our list was the village of Low Newton on the Sea, just up the coast, but neither the weather, the tide, or time was on our side! After a couple of sandwiches at The Ship Inn, the tide was in on the lovely beach, it was raining out, and my legs and feet were in absolute agony after the run the day before.

We decided to use the afternoon for a drive down the coast instead and took a drive through some of the lovely villages, stopping in Alnmouth for hot chocolate and cake.

The next day we got up early and headed to Holy Island, also known as Lindisfarne.

Lindisfarne is such a special place, it has such a magical quality that has to be felt to appreciated! You have to cross a causeway to get there and there are only a few roads on the tiny island, which many people take a pilgrimage to.

Rather than a holy pilgrimage, we took in the castle and the priory and stopped for some fudge!


However, you have to carefully check the tide times to get back to the mainland and by 1.30pm it was time for us to head back across - or else set stuck there another seven hours!

After that we visited Bamburgh, and it was a lovely sunny afternoon. We had a delicious lunch at The Copper Kettle  before skipping the castle for a walk on the beach while the tide was still out. It has beautiful white sands and is so picturesque with the castle in the background.


After Bamburgh we headed down the coast to Craster, which had been too rainy to explore the day before, and stopped for a pint overlooking the sea. It was a lovely end to the day.


For dinner, we headed to The Dirty Bottles in Alnwick, a burger and American food joint with a spooky past. That was also lovely food and well worth a visit, even just to see the cursed bottles themselves....


The next morning we were all done! We made a stop at Durham on the way back, visiting the Cathedral and having a tour around the City centre before making our way back to Whitby and Robin Hood's Bay for our last stop before home.