Self care when you're by yourself - lockdown personal safety edition 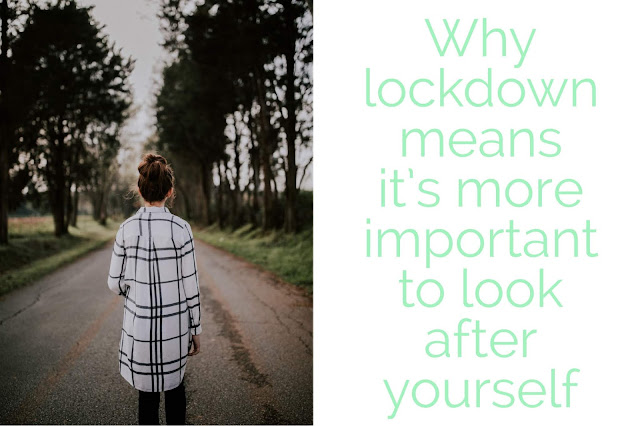 In November I wrote about learning how to balance my new independent lifestyle, where I made the most of living alone, with my need for some more consistency and healthy habits.

Back in November I had a complete different set of problems to now though! I remember going out, having too many drinks and spending too much time hungover and not always being safe with getting home etc and realising I needed to slow things down and care for myself.

Now, even with all the bars and pubs shut and a whole new quiet lifestyle, it's even more important to care for yourself.

If living away from your friends and family made if difficult for people to know how you're really doing before, having a quarantine and travel ban and strict rules about where you can go and who you can see makes it so much harder.

In November I wrote:

"I think people tend to think that if you're not telling them you're struggling with something then you are fine, so maybe don't always want to check in on you and make you feel patronised, so it's so important if you're not seeing your loved ones everyday to keep a check on yourself and make sure you're meeting your own needs and getting some help if you need it."

This is more important than ever.

Before lockdown, if I didn't come in to the office one day and didn't phone in, people would notice. Now, people aren't really going to notice if I'm unwell or not doing great as they can't physically see how I'm doing.

Even with loved ones still available a message or phone call away at all times, the actual physical chance to have your needs met has gone. And so have ways of keeping yourself physically safe, especially as a single woman living alone. That was highlighted to me in a warning to the public from Humberside Police this week.

Sadly, there has been a rape and an attempted rape not far from where I live in the Beverley Road area of Hull.

The rape took place on Cave Street - which I cycled down just on Monday.

Of course, the Police have a duty first and foremost to keep the public safe - and their advice to women nearby was - “When out walking, remain with a trusted friend or family member where possible and try to use well-lit busy roads for your journey."

I mean, we all know this kind of advice feels like victim-blaming - but we also all know that even though people shouldn't attack people - they do. So we have to be sensible and take precautions.

Remaining with a trusted friend or family member? This has not been possible for me the last eight weeks! It's been a Government mandate to absolutely not see anyone from outside my household of - me.

Does this mean I should have stayed at home, not going out for my daily exercise in case someone attempted to attack me on my bike ride? I would have gone actually stir crazy were it not for the chance to get some exercise every day.

(Maybe I should have used 'common sense' and  'my instincts' like the PM suggested Dominic Cummings had done to keep myself safe and broken the rules?!)

When I first moved to the city, Libby Squire had been murdered a few months previously. I remember when it first happened driving into work past the bench where she was last seen alive, laden with flowers and balloons, candles and tributes, while she was still missing. It was so close to home and so shocking that a young woman was missing, believed to be dead - and the whole city was in shock. This kind of thing was so unexpected and so heartbreaking - it really affected a lot of people.

When I first moved into my home by myself some months later, even with the man suspected to have killed her jailed for eight years for other crimes against women, I still felt unsafe. It was all so close. When I give my friend a lift home from work I drive down the street where he had lived and committed some of these crimes.

I knew that living by myself for the first time, I would have to make sure I was safe and I read lots of articles with tips about living alone as a woman and made some precautions.

I know that if someone decides to attack me, it's not my fault. If I was drunk, I was alone, whatever... it still wouldn't be my fault. But my personal safety is still now my sole responsibility.

For now, I'm feeling uneasy about being out by myself. It's added a whole new vulnerability to what is already a really uncertain time and we're all feeling worried when we're out and about.

But I don't want to live my whole life scared and not doing things 'until I get a boyfriend'. I want to still be able to experience life as I would do in a couple. I want to still go for nice walks in the countryside, go on holiday, get home from the pub safely and not worry about always having a friend to do these things with in the off chance someone decides to attack me. And let's not forget the Police had to say "trusted friend" in their statement as most crimes against women happen from people they know.

Is there a way to balance my need for independence with the need to stay safe? I believe so. Is it harder during this time when we're all isolated? I think so. But do I want to be too scared to go for a bike ride by myself? No I do not.

So I will stick to the main roads and will not go out alone after dark. I will regularly check in on people. I will make sure to moderate my behaviour and put my safety first - even when it feels unfair to ask me to do so.